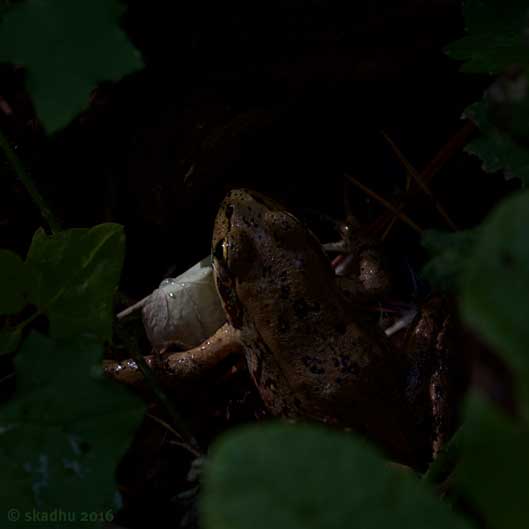 After all those depressing links, let’s look at a frog. This little guy hangs out near bushes not too far from our back door. 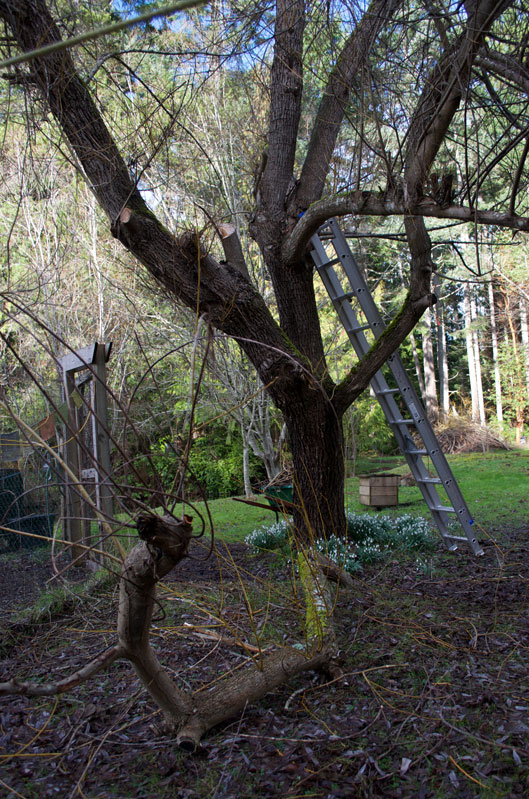 This took up most of my time in the yard today. It’s a weeping willow, and one of the trunks hangs over the veggie garden. I can’t deal with all of it with a pruning saw, so a professional is going to have to handle most of it. But I can deal with some of it! Yesterday and today I took off a couple of side branches; you can see where they were cut. One of the branches is in the foreground. It’s about six inches diameter where I made the cut, and yes, it was done with a pruning saw on a ten foot extendable arm.

It took a while.

I strung ropes to ensure it wouldn’t come down on me (willow has a tendency to suddenly break) and they worked perfectly, although I couldn’t prevent it from coming partly down on the wire fence. So pericat had to help swivel it off. There’s a couple more branches I may cut, but that’s it for today; and beyond that it’s all too high for me to reach. I feel very virtuous.

But there were other things in the yard! I’ll post the pictures of spring flowers tomorrow, probably, but for now have some arbutus bark and a wee friend.

And here’s the little friend. There were actually two—one was in the veggie garden, where I spent some time weeding—but I only got pictures of this one. 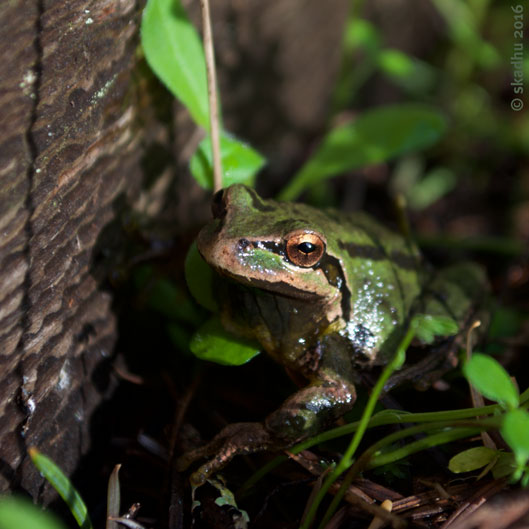 At this time of year they’re pretty sluggish because it’s still cold. Let’s hope there will be a gazillion of them in the pond; it won’t be long now till the spring chorus starts.

We have an outdoor “insta-shed” that’s really just a fitted tarp over a frame. Today I unrolled the door flap—which has been rolled up for quite some time—and three treefrogs fell out. This was one of them. 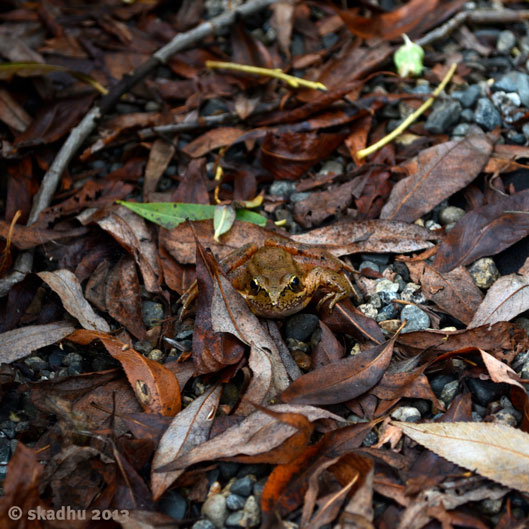 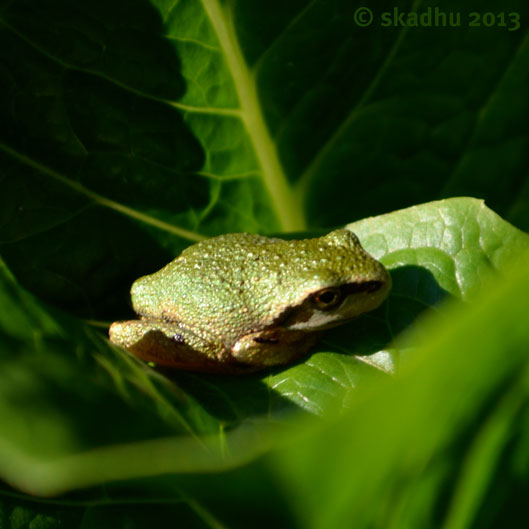 And lovely colours, too… light green except for bronzey legs. 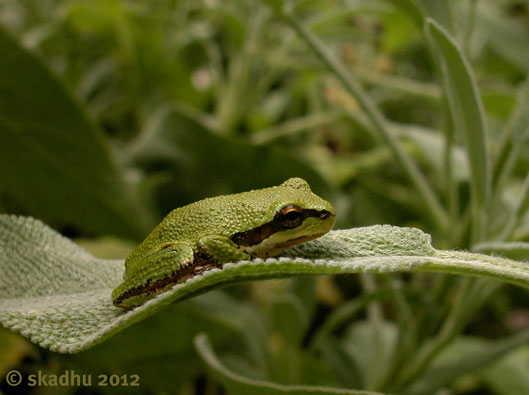 There was a froglet on our sage plant yesterday. 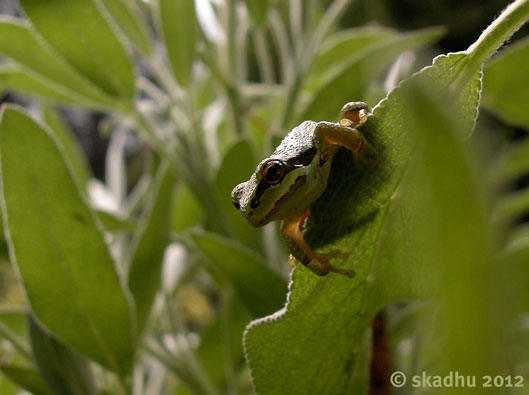 It didn’t much like having closeups taken, and prepared to jump. But then it got distracted by a bug and forgot everything else for a while. 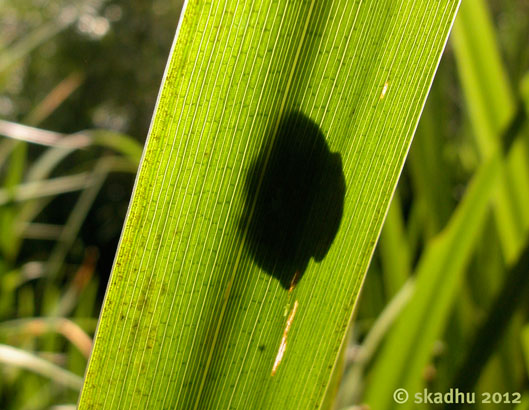 At this time of year, sometimes I see a shadow on an iris leaf. It’s worth looking to see what’s on the other side.

(Posted a day late, because we unexpectedly were invited out to dinner…)

On Thursday I mowed the lawn. And when I mowed the part by the pond, I was appalled when I realized I’d run over a big frog. There it was, spread out on its back, dead as a doornail.

But then I went to dispose of the remains, and realized that the frog was stiff as a board and had clearly been there for a day or so. I may have mowed over its body, but I didn’t kill it. While this was  a relief in some ways, it was disturbing in others.

We moved to this property four summers ago. The number of frogs I saw around the pond then was astounding: my record was counting twelve in one casual circumnavigation, and I’m sure there were many more I didn’t see. Most were treefrogs, but a fair number were red-legged frogs, which are much bigger. It’s hard to count frogs unless you see them all at the same time (how do you tell individuals apart?) but I’d estimate that there might have been ten or so red-legged frogs hanging about the pond and slough that summer.

The year after that, the frog population overall went down a lot. We attributed this to the number of ducks visiting the pond—we’d fed an injured duck and then an orphaned duck, which of course attracted many more, and at first hadn’t realized that they ate frogs. Well, that was a lesson, and for the last two summers we’ve been careful not to feed the ducks. They come to the pond with their babies anyway, dabbling, but not as often, and they don’t stay as long.

But over the last two summers, although the treefrog population seems ear-splittingly fine, the red-legged population has seemed to decline. Last year I saw a few, but nothing like the numbers from the first year. This year I’ve only seen a couple—and this guy was one of them, and a big one.

And here’s the thing. Two days before I mowed, I saw this frog swim lethargically across the pond and hang slightly askew in some vegetation. I went and got my camera and took this picture. At the time I thought the frog was weirdly tolerant of my reaching a camera as far as I could towards it. Now I’m wondering if it was on its last legs.

And that leads to the big question: why? Why did it die? Was it just old? Was it sick? What’s happening to the population of red-legged frogs on our land? Is there something wrong with our pond, apart from ducks? (Everything seems healthy at the moment, although last year we had an algae bloom.) Is there some kind of natural cycle they go through?

More questions than answers, I’m afraid. But I’m hoping the frogs will come back to the previous numbers. 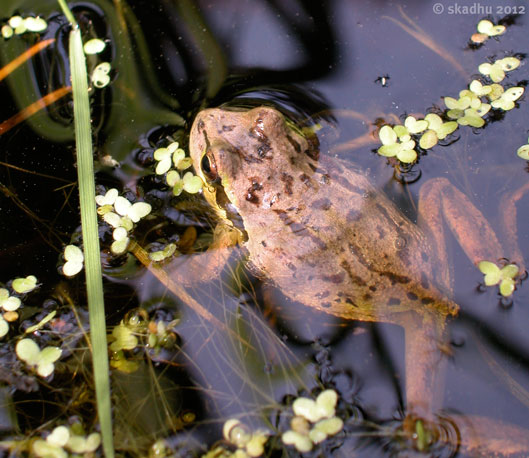 In and around the pond, to be precise.

This little guy was a bit shy. He wasn’t one of the really tiny ones, but he was pretty small—I’d estimate his body was no more than an inch long. 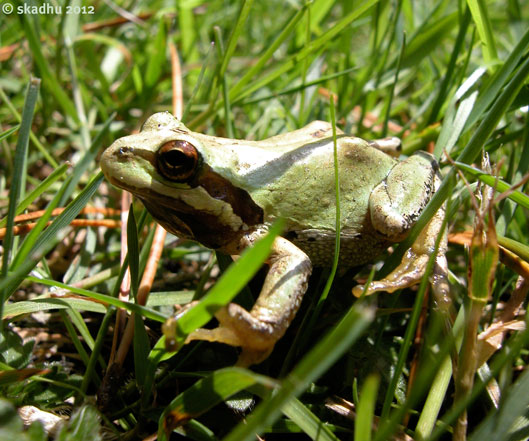 Spotted this little guy beside the pond today. The picture doesn’t show it, but its back is a lovely golden colour—the green tinting is just on the sides.

And shortly after, I looked around and spotted the first ducklings we’ve seen this season as mamaduck brought them across the lawn from the slough to the pond. 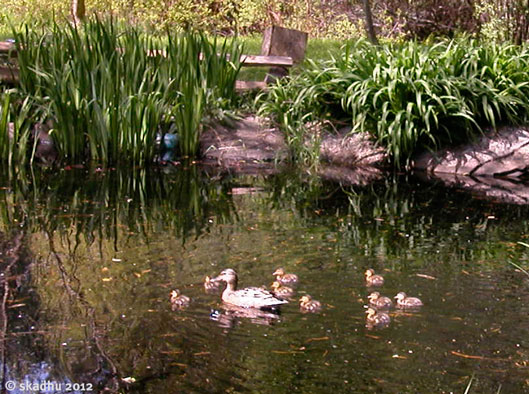 There are 10 ducklings altogether—we’ll see how many survive. She didn’t seem terribly disturbed by our presence, which makes me think she must be Ducky, the injured duck we fed a couple of years ago. (We don’t feed the ducks anymore, not since discovering that they EAT FROGS.

I guess the frogs like our porch because it’s nice and cool underneath, and relatively safe. It probably doesn’t hurt, in a drought like we’ve had, that we water the bushes next to it. I encountered this red-legged frog on the lawn, but when I got too close it promptly hopped over to the porch and up the steps. And there it sat, so I went and got my camera.

It was awfully patient, didn’t move even when the lens was an inch away. Since the visitation of ducks last summer the frogs have been noticeably more skittish, but this one was pretty calm—or perhaps just resigned? Maybe it’s because temps are getting coolish.

One of the things I find most fetching about frogs is their eyes—many are such a lovely golden colour, like this one. Cleopatra needed kohl, but these guys don’t!

And yes (sigh) that is a dog hair. Almost every picture I take has dog hair in it somewhere, somehow.

Yesterday this treefrog turned up on the railing of our front porch, and stayed there all day. It didn’t seem perturbed by us coming in and out, nor by my taking pictures of it. A laid-back frog, all in all.

Today, there it was again. And things got even more interesting. END_OF_DOCUMENT_TOKEN_TO_BE_REPLACED

Last night just before I went to bed someone started croaking right outside our front door, so I got my camera and went hunting. And there he was, tucked under a bag that was waiting for garbage day.

It’s not a very good picture, but you can see the swollen air sac under his mouth. He just sat there, not deflating, patiently waiting for me to leave so he could carry on. So I left him to it.

I’ve noticed that the wee froglets popping up arrange themselves like little scarabs on the leaves, all toes tidily tucked away. This one’s leaf got caught by a breeze and flopped mightily for a few seconds—two legs shot out on one side and clamped to the leaf during its gyrations, and then the scarab position was daintily reassumed. 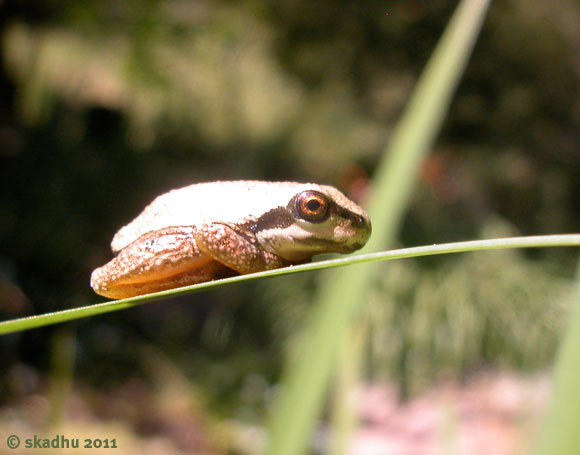 My best guess is that they’re basking but this is a way to prevent the skin on the tiny legs from drying out too fast. Anyone know if I’m right?

For some reason I hadn’t seen any little treefrog froglets this year, although Gabriolan seems to have scads of them. Maybe it’s because Gabriolan has dahlias and I don’t. (I still think it’s the fault of the deer somehow, though.)

But today, finally, I spotted not one but two on the same bunch of iris leaves. Plus several larger red-legged frogs by and in the pond and slough. It’s been a very froggy day. But I had been missing these little guys—somehow there’s nothing as cute as a little green froglet only half an inch long.