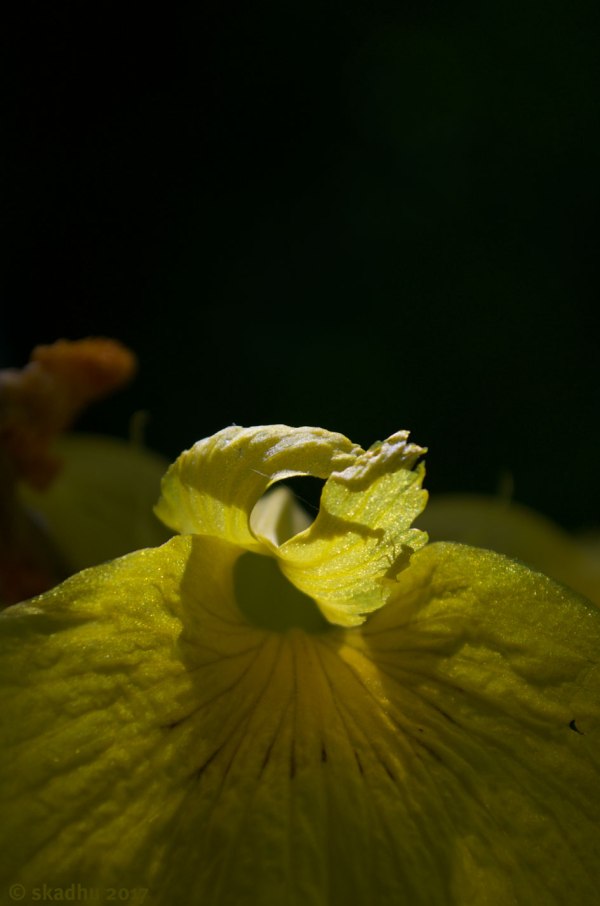 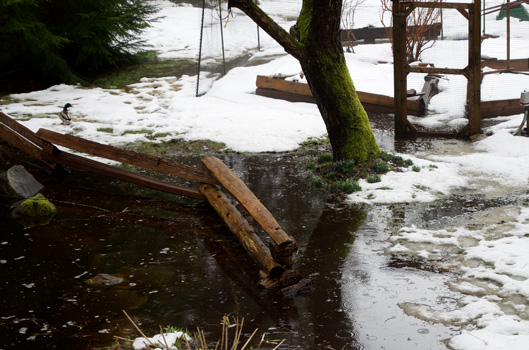 Our pond is a wee bit overfull. The ducks were swimming on the lawn today. They didn’t like it when I came outside, so no pictures of them actually swimming, but…

Well, I seem to have dropped off the face of the earth when it comes to posting, but I’m hoping to start up again. So in the spirit of This Is What I’ve Been Doing: 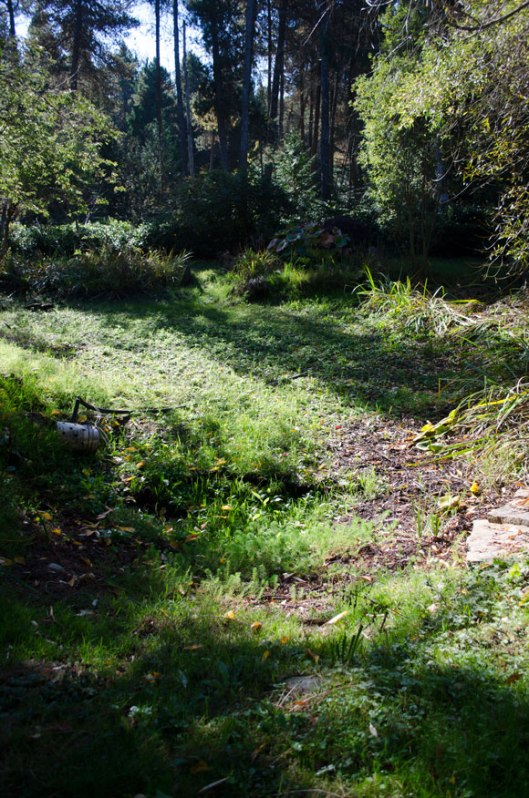 This is our pond. You will note that it has no water in it. It hasn’t had water in it since spring. It’s gone down to mud before, but this is beyond mud: this is solid earth that can be walked across, with grass and weeds. (Well, that was true two days ago, there’s been a little rain since then and it’s gotten softer in places, as I inadvertently discovered. But even after the rain, this is what it looks like.) 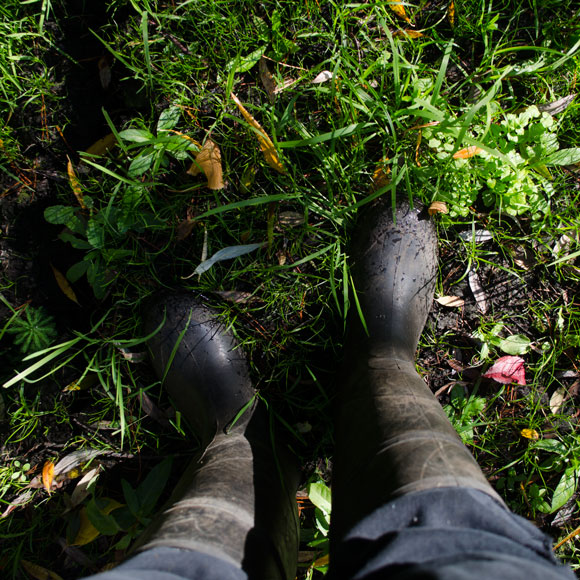 Just to reinforce the idea, these are my feet in the lowest part of the pond. 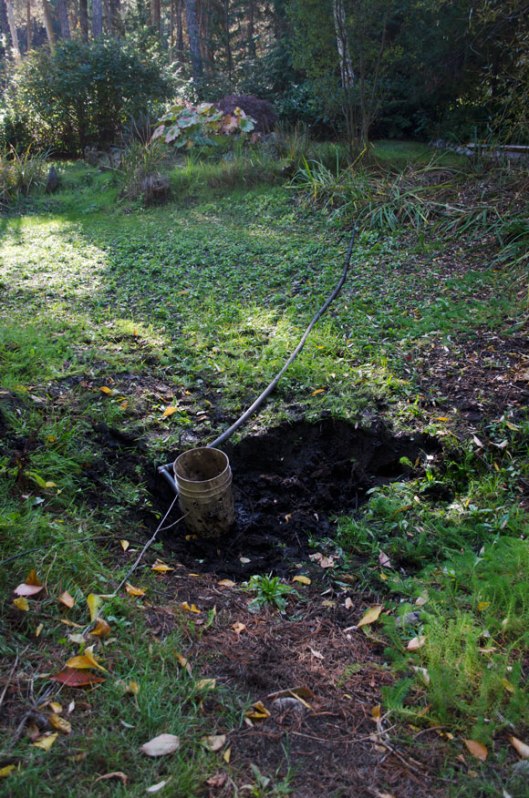 And this is the pond again, after I started digging out the dirt from the bottom of it. The 5-gallon bucket houses the pond pump, which I’ve set up in place, ever hopeful. I figure it’s likely great dirt, so I’m slowly moving what I can to more useful places—starting with the berm with the rhodos. It’s not that they need wonderful soil, but they drain so fast it’s hard to keep them alive in a drought, and I’m figuring if I can build an earthen moat around each one it’ll help slow the drainage when I need to water them in future.

It’s all actually quite worrisome. I’m told that the swamp behind us has gone dry. I didn’t see any froglets at all this year—I suspect the pond dried before the tadpoles could grow legs and make it out of the water. I don’t think anyone has seen anything like this before. I’m afraid it’s a sign of things to come. 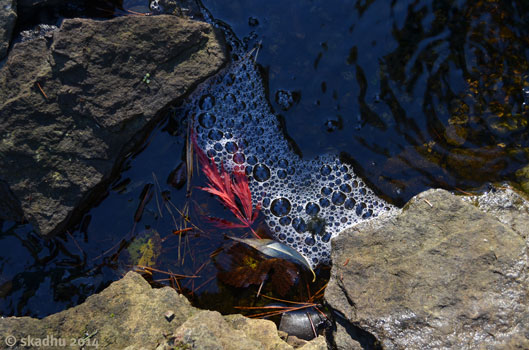 It’s all about the colour. 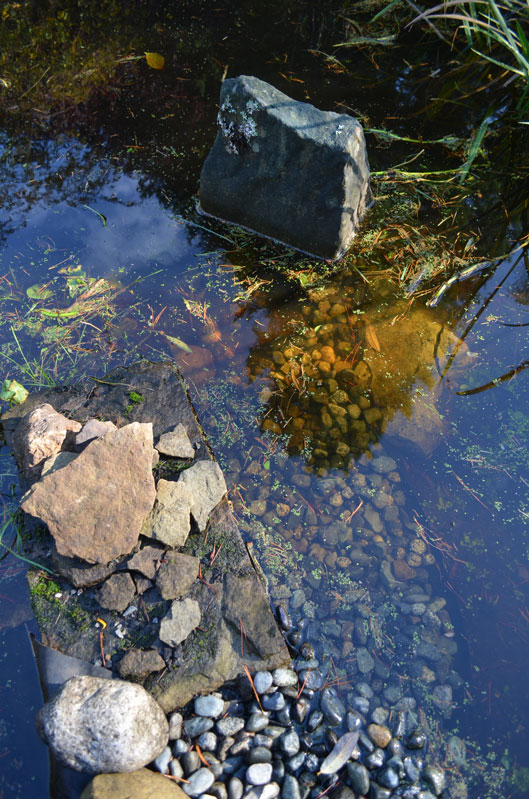 The pond has come up at least 3 feet since the rains started. It’s covering some of the edging I did along the course of the pond waterfall. The big flat rock with smaller ones on it will be underwater very soon, I expect.

This is the time of year when the wee frogs start emerging from the pond; I’ve found a couple while deadheading irises (DON’T get me started on the idiocy of the people who planted them in the first place). When I spotted this little guy I grabbed my camera and shot a few pictures. 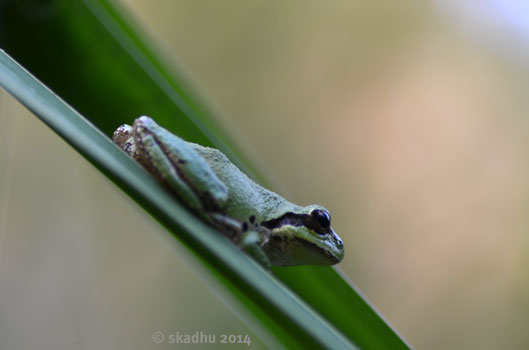 They’re not as crisp as they could be; the light was really too low for handholding… 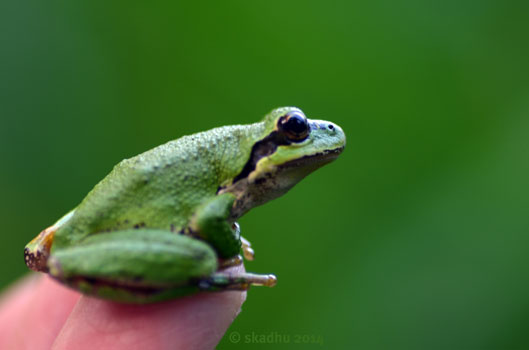 ….especially when handholding with one hand because the frog was on the other one. But good enough, I think. 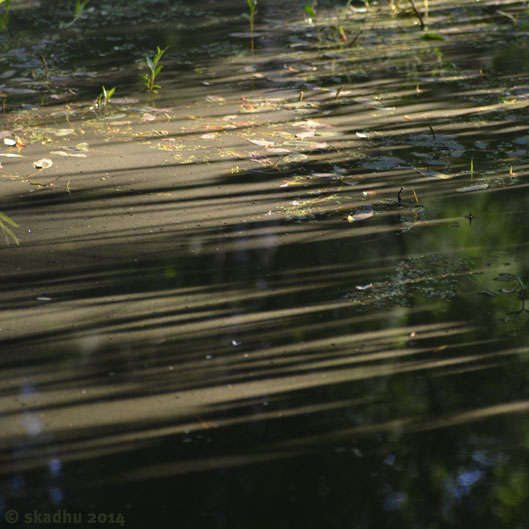 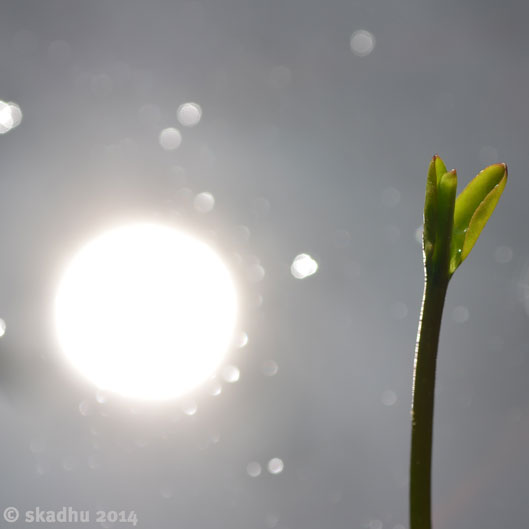 The shoots are coming up in our pond. 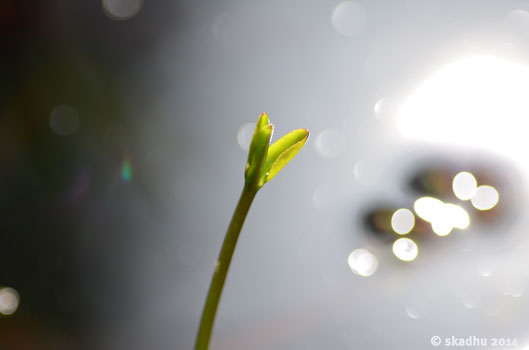 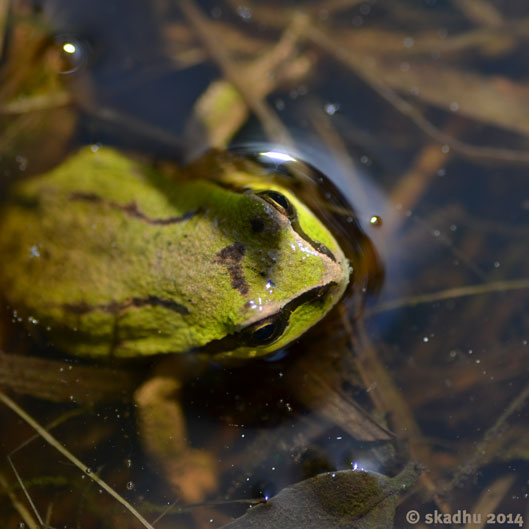 I must say, it’s easier to take pictures of frogs when your rubber boots don’t leak and you can be in the pond with them. 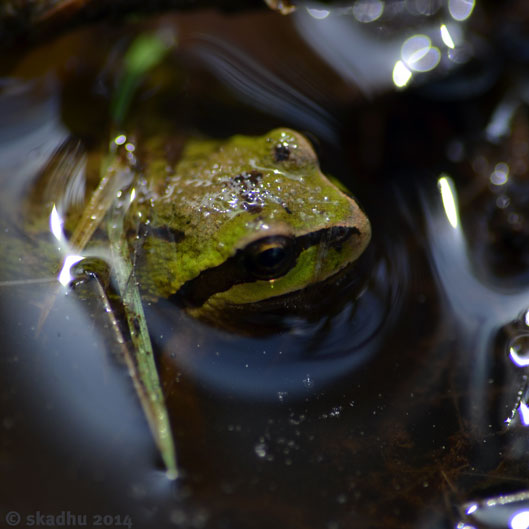 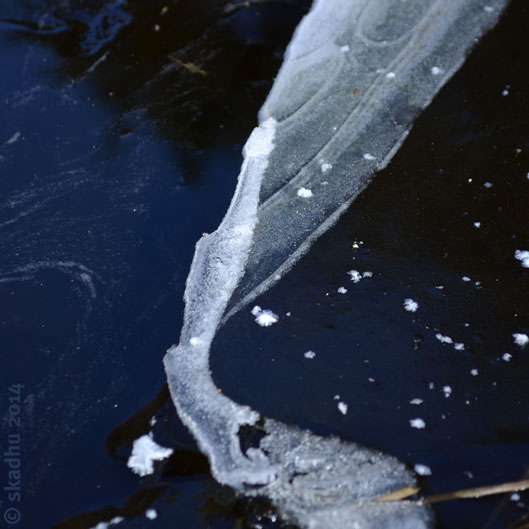 It’s going to be a monsoon tomorrow, let’s post pictures of ice. 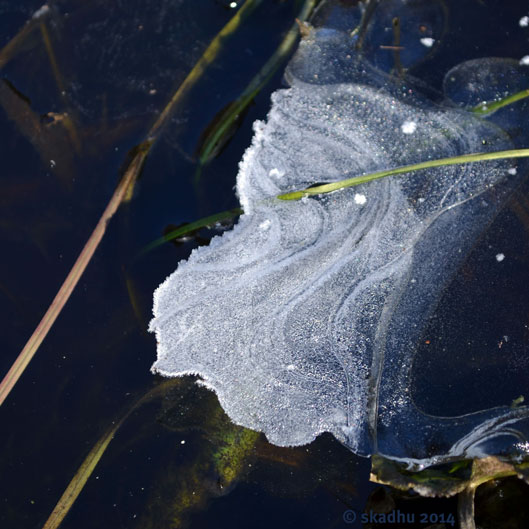 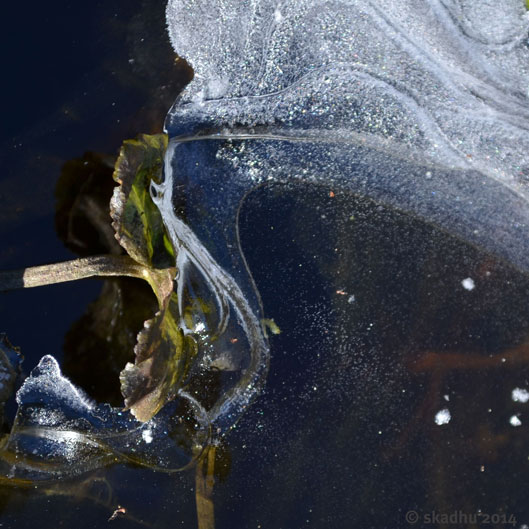 In winter the pond gets kind of aggressive and the land around it gets soggy. This soggy. (Note to self: replace that boardwalk thingie, the fact that it’s too waterlogged to float is Not a Good Sign.) 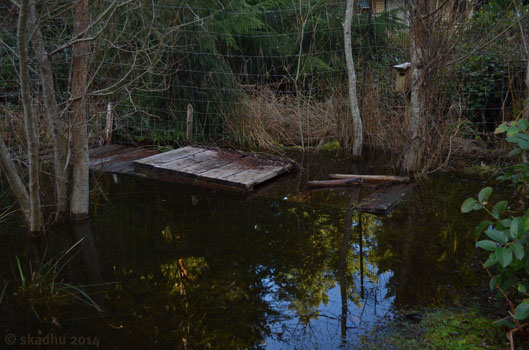 This is the corner that got walloped by the pine and fir; these pictures were taken a few days previously. Not sure how much will have survived the walloping to make pretty reflections. 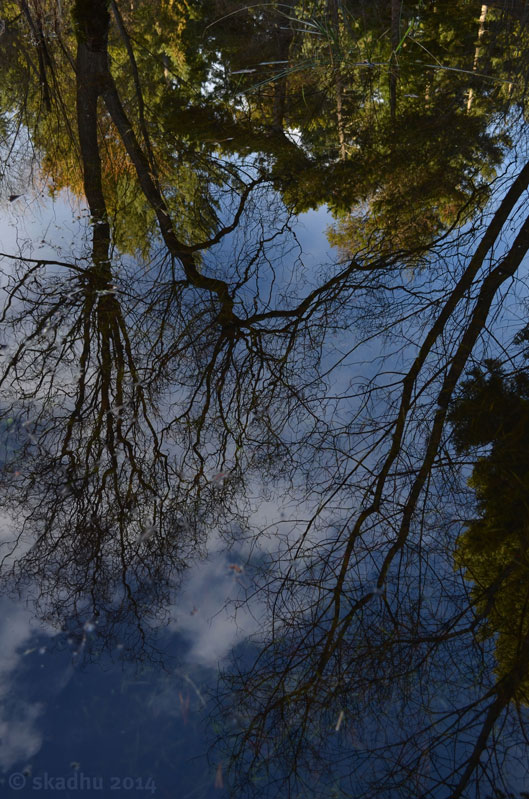 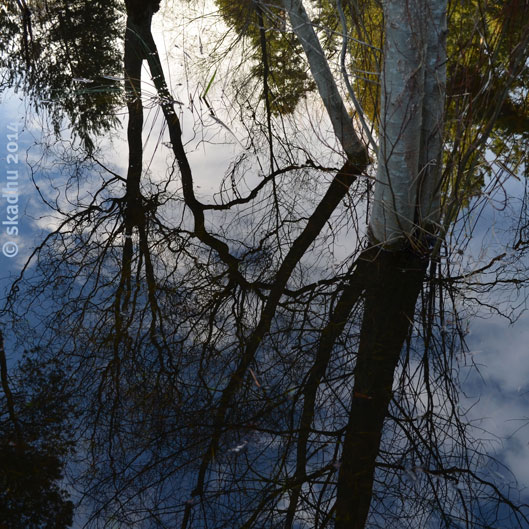 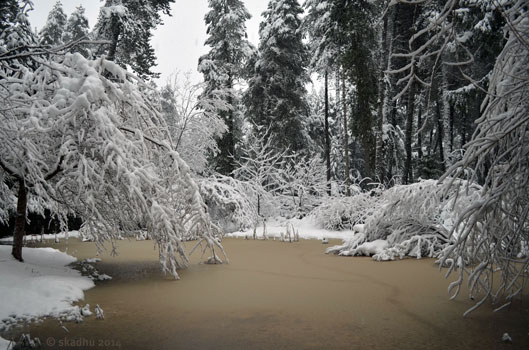 Thought I should post some pictures of less catastrophic things so that it’s clear it wasn’t all doom and gloom. 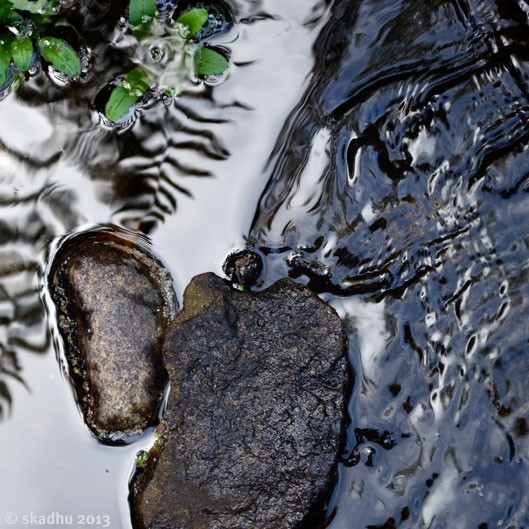 Our pond has a pump buried somewhere in the depths, hooked up in complicated ways to pipes leading to rocks leading—well, the end result is water tumbles down a wee artificial stream filled with rocks back into the pond. It produces quite photogenic results. 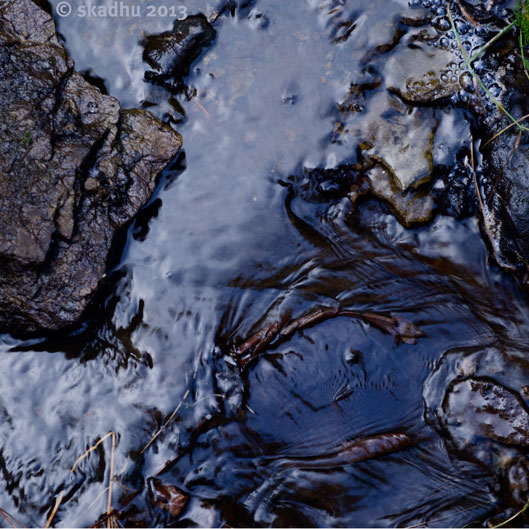 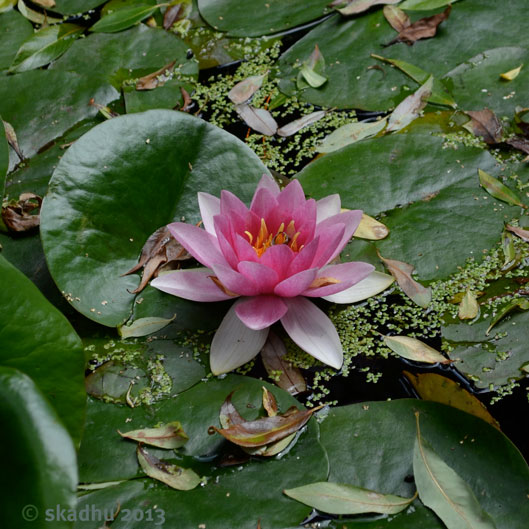 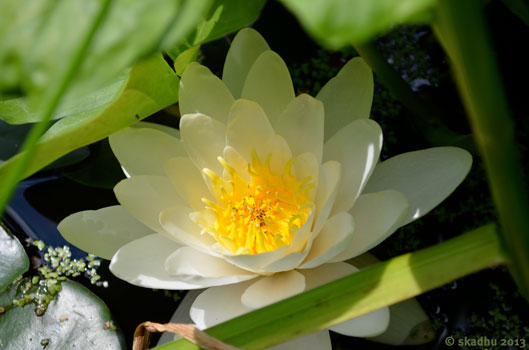 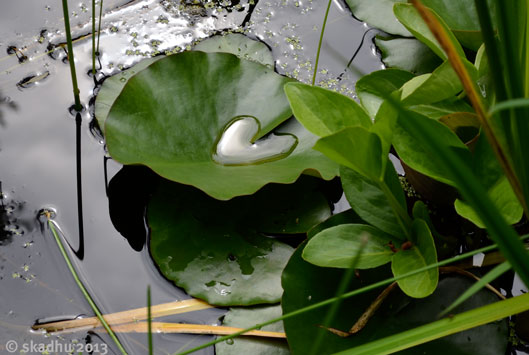 It was the way the collected rain puddle made a heart that caught my eye. 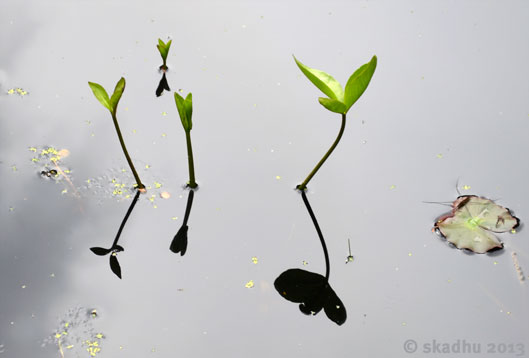 This is one of my favourite plants in our pond—buck bean, Menyanthes trifoliata—and luckily it’s not only easy to grow but also apparently good for the pond. And the flowers, when you can get close enough to see the details, are so pretty. 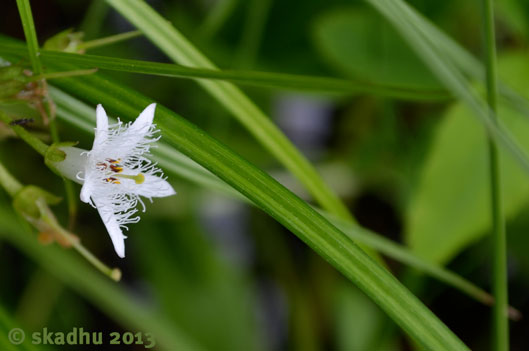 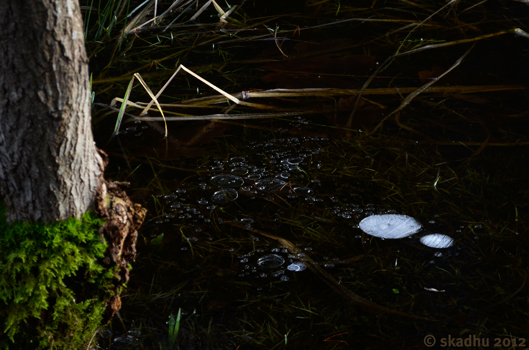 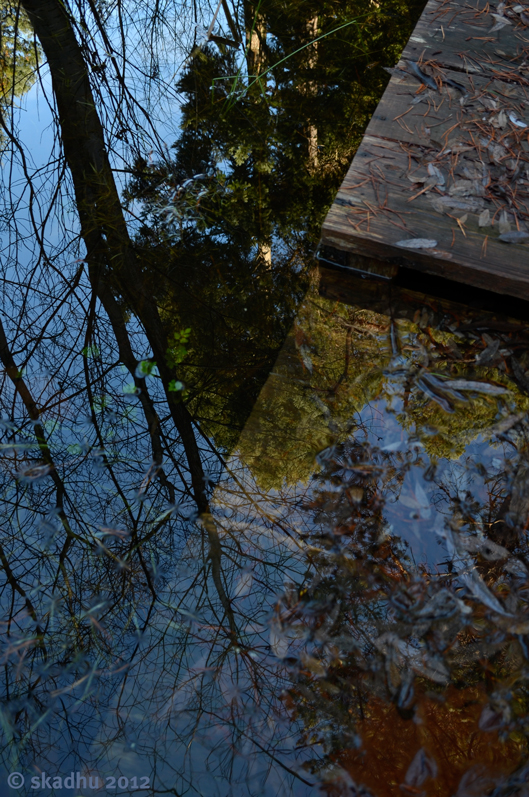 It rises every winter, actually, and in summer drops to mostly mud. That’s just what it does. But this year it’s as high as I’ve seen it; and the walkway that keeps one above water and the squishy bits on the east side is largely under water and requires rubber boots and considerable care to navigate. Maybe we need to raise it a bit. (But oh, the reflections!)